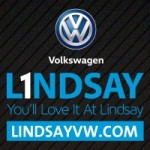 Lindsay Volkswagen Auto Repair Service Center is here to keep your vehicle in excellent condition. Serving the Manassas and surrounding areas, we have a dedicated team of professionals ready to assist you with all your maintenance needs. L... Read More